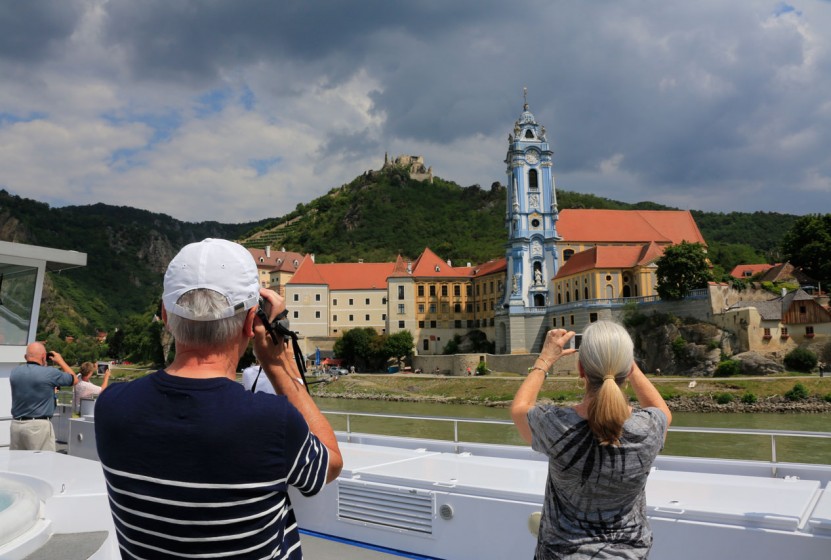 As Europe’s second-longest river and a vital means of transportation for 2,000 years, the Danube is the only major European river to flow from west to east. The Danube river rises in Germany’s Black Forest and flows through or along the borders of 10 countries – Germany, Austria, Slovakia, Hungary, Croatia, Serbia, Bulgaria, and Romania, where it divides into an expansive delta, the northernmost branch of which continues along the border of Ukraine and Moldova, before entering the Black Sea. The Main-Danube canal, which joins the Main and Danube rivers and stretches for a length of 106 miles from Bamberg to Regensburg in Germany, with a total of 16 locks, has made it possible to travel by river cruise ship from the North Sea to the Black Sea.

Travelers who want to be exposed to a wide range of new cultures and experiences will soak up the sites along this sprawling waterway. History-, art- and music-lovers will all find the objects of their desires along these waters. The Danube also boasts a unique mix of urban and rural sites. Explorers who appreciate dramatic natural scenes and also delight in the bustle of the world’s great cities will see the best of both worlds as they cruise down this mighty European river.

Does this sound like you? Are you traveling to the Danube in 2015? Below are the 16 highlights you won’t want to miss:

1) As the Danube leaves the cover of German’s Black Forest, it trolls through the pristinely-preserved medieval town of REGENSBURG. This bustling university town boasts ancient treasures like the Porta Praetoria—the north gate to the ancient Roman fortress, Castra Regina, built in 179 A.D. During the holidays, Regensburg shines bright with its Christmas market lighting up the historic market square.

2) Farther downstream, PASSAU, Austria, is a gem of a city located at the confluence of the rivers Inn, Ilz, and Danube. Cobblestone streets lead the way to St. Stephen’s Cathedral, which houses the world’s largest church organ with more than 17,000 pipes.

3) Continuing along, the village of GREIN offers excellent photo opportunities, with its turreted houses lining the main square in the shadow of its idyllic castle perched high on a bluff.

4) Situated in the rolling green hills of the Wachau Valley, MELK is home to the magnificent Benedictine Abbey, one of Europe’s largest and most intriguing monasteries. Step out onto the monastic terrace to look out over the Danube and take in the mesmerizing view of the sweeping countryside.

5) Float through the Wachau wine region to DÜRNSTEIN, known for the magnificent baroque Stiftskirche with its blue façade. Above town are the ruins of the castle where England’s King Richard the Lionheart was imprisoned in 1192.

6) VIENNA, Austria’s capital, is next. The “City of Music” inspired the creative genius of Mozart, Beethoven and Strauss. Once the center of the mighty Habsburg Empire, the city has much to offer—the lavish Hofburg Palace, the impressive Vienna Opera House, and the majestic Ring Boulevard, to name just a few. Visitors can waltz their way down shop-lined streets, savor the sounds of an orchestral concert, or delight in a Sachertorte or Apfelstrudel in a neighborhood café.

7) Sail on through the picturesque Austrian views before heading to the heart of Hungary. Spanning both banks of the Danube, BUDAPEST is Eastern Europe’s liveliest and most cosmopolitan metropolis. Seven bridges, including the famous Chain and Elisabeth Bridges, connect ancient Buda on the right bank with Pest on the left. The massive hilltop castle complex with Fisherman’s Bastion and the Matthias Church is among the many sights of Budapest that impress and excite.

8) South of Budapest, the quiet town of KALOCSA, Hungary, was founded by St. Stephen in 1009. The Archbishop’s Palace and the Kalocsa Cathedral are must-see sights in this town that is most known for paprika and folklore art.

9) The Danube winds away from Hungary and through the city of NOVI SAD, Serbia. Steeped in history, the hilltop Petrovaradin Fort affords dramatic views of the Danube.

10) On to Serbia’s capital, BELGRADE, situated at the confluence of the Danube and Sava Rivers. Full of lively pedestrian areas and imposing cathedrals and fortresses, Belgrade is a riveting study in contrasts.

11) The Danube flows away from Belgrade, through rustic hills lined with stunning Roman fortresses, and through the dramatic gorge of the IRON GATES. This narrow and formerly very dangerous passage divides Europe’s Alps in the northwest from the Carpathians in the southeast and forms a natural border between Serbia and Romania.

12) Downstream, Bulgaria’s most ancient and breathtaking treasures can be found a short drive away from the Danube. VELIKO TÂRNOVO, situated on three hills surrounding the Yantra River, is a natural fortress with stone houses clinging to its steep slopes.

13) The historic village of ARBANASSI is nearby, featuring the well-known Ethnographic Museum and intricately designed frescoes in its Church of the Nativity.

15) A short distance away, the resort town of VARNA sits on the shores of the Black Sea. Its storied past comes to life as you walk through Roman baths and marvel at the Gold of Varna, an archaeological wonder.

16) BUCHAREST, Romania’s lively capital, is only a short drive from the shores of the Danube. Its wide boulevards and Arc de Triomphe have gained it the name “Paris of the East.” Enjoy people-watching in the Royal Palace Square, the scene of riots in 1989 which led to the collapse of the communist dictatorship. The Royal Palace now houses the National Art Museum and is filled with priceless examples of Eastern European art.

Ready to book your trip on the Danube? Check out your options here. If you’re already going in 2015, learn more about the Danube here.