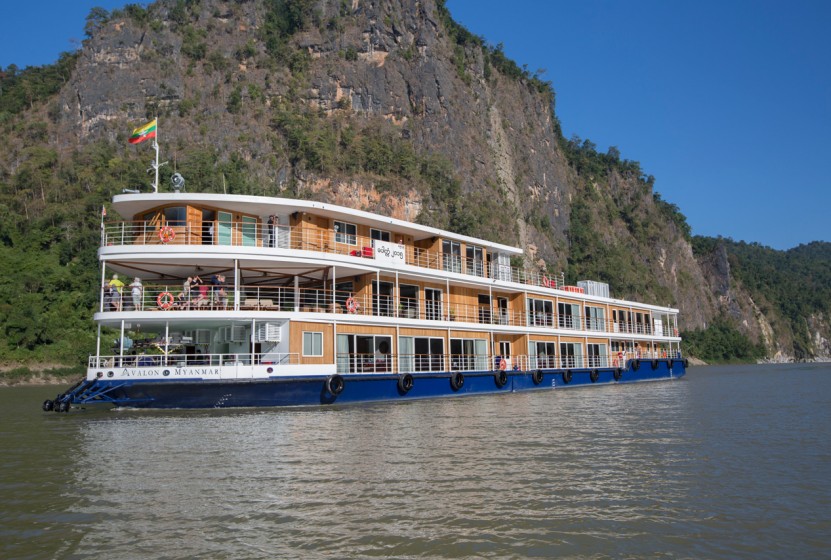 KYA HNYAT, Myanmar — To the residents of Kya Hnyat, a village of thatched-roof huts more than 700 miles up Myanmar’s Irrawaddy River, the arrival of the Avalon Myanmar must seem like the coming of an alien spaceship.

Women washing clothes along the village’s muddy waterfront stop mid-scrub to stare at the gleaming, three-deck-high river ship. Barefoot children run down dusty footpaths to catch a glimpse of its occupants. Even the scrawny dogs wandering the shoreline seem to be curious.

In this remote corner of the country, it turns out the appearance of a platoon of Western tourists is as much of a novelty to the locals as the locals are to them.

Launched in October, the 36-passenger Avalon Myanmar is operating voyages along a northern segment of the Irrawaddy that is rarely visited by outsiders.

Marketed by Colorado-based river line Avalon Waterways, the cruise vessel is one of more than half a dozen to debut on the Irrawaddy over the past two years as the country rapidly opens up after decades of isolation. But for now, the other ships are mostly sticking to the 120-mile stretch of the river from the tourist hub of Mandalay, a former royal capital, to Bagan — the famed home to more than 2,000 stone temples and perhaps Myanmar’s best-known visitor site. While some vessels go as far south as Yangon, Myanmar’s largest city, the Avalon Myanmar has the north pretty much to itself.

For passengers, the voyages offer a glimpse at one of the last pockets of Southeast Asia still relatively untouched by tourism and only recently opened to the modern world.

Children of the riverfront village of Kya Hnyat, including a young monk, marvel at the Avalon Myanmar. (Photo: Gene Sloan, USA TODAY)

In Kyun Daw, a village of about 250 families set on the only island along the Irrawaddy, residents are so unaccustomed to visitors that they don’t even try to sell them anything. Passengers trade songs with giggling children at a one-room school before meeting with pink-robed nuns at a nearby nunnery. At Katha, a town of several thousand, the group draws curious looks from residents while wandering through the bustling local market. One mother nudges her children and points at the oddly dressed outsiders. Others pull out the cellphones that only have become prevalent in the last few years to snap a photo — turning the tables on the camera-toting tourists.

Among the poorest regions in Asia, northern Myanmar is a land where traditions remain the way of life. Women still cover their faces with thanaka, a yellow tree-bark paste, and wear the traditional longyi, a sarong-like garment that dates back centuries. Farmers still use horse and oxcarts to bring goods to market. The Buddhist monastery is the center of village life.

Avalon’s new Irrawaddy trip, which also includes stops in the more-regularly-visited lower part of the river, is launching as Mynmar is in the midst of whirlwind change after years of oppressive military rule. Just last month, the party of liberation activist and Nobel Peace Prize winner Aung San Suu Kyi won a sweeping victory in landmark elections.– the latest milestone in an ongoing series of reforms that has led Western nations to lift sanctions and allowed the former British colony to begin emerging from the tourism shadows.

The epicenter of the transformation sweeping Myanmar is Yangon, where Avalon’s tour begins with a two-night stay. Known in British times as Rangoon, it’s a bustling urban hub famous for its grand but decaying colonial buildings, gold-covered pagodas and, increasingly, intolerable traffic.

A walking tour of the city center with an Avalon guide reveals lively streets lined with pop-up food stands selling everything from sliced pineapple to fish curry (cooked over a wood fire in a pot set right on the sidewalk). Other makeshift stalls offer the psychoactive betel nuts that many locals chew (staining their mouths blood red) while still others offer clothing, electronics and even legal services.

A city in transition, Yangon is a place where many residents of both sexes still wear the traditional longyi even as they chat away on modern cell phones. Construction cranes are everywhere, and sleek hotels and condominiums are popping up like islands in what otherwise is a sea of crumbling structures that often are so unmaintained that trees grow from cracks in the plaster.

Among the highlights of the visit to Yangon is a sunset stop at the soaring, gold-covered Shwedagon Pagoda, one of the oldest and grandest Buddhist sites in all of Asia. Rising more than 300 feet, it’s to Myanmar what St. Peter’s is to Rome, and a pilgrimage site for locals and tourists alike.

The visit to Yangon also includes a glimpse at several locations that have become iconic in the recent struggle for democracy, including City Hall, where protestors gathered during the 2007 “Saffron Revolution,” and the lake-front home of Aung San Suu Kyi.

Still, it is not until Avalon passengers fly a chartered plane to Bhamo, in the far north of the country, that the true adventure begins. Just 30 miles from the Chinese border, the dusty Irrawaddy river town where the Avalon Myanmar awaits sits just above the Second Defile, a dramatic stretch of the river lined with 800-foot cliffs.

The low-lying river banks below the Second Defile are sparsely populated and the river itself almost devoid of traffic other than the occasional fisherman in a narrow wooden dugout. Simple villages spread every few miles feature clusters of one-room homes on stilts surrounded by rice and bean fields.

Flowing out of the Himalayas, the Irrawaddy meanders more than 1,000 miles southward through the center of Myanmar to the Andaman Sea, and it has long been the heart of the country. But while its lower end is dotted with urban hubs such as Mandalay, its northern segment remains a quiet and rural passage. Large swaths of the riverbanks in the north are lined with farms, forests, palm-like betel nut trees, and, in many areas, large and shifting sand banks that disappear under water during the rainy season. Wide and shallow, the river resembles a lake in places, and is tricky to navigate.

As the Avalon Myanmar steams southward, more traffic appears on the river, from curving wooden sampans piled high with rice bags to flat-bottomed barges carrying giant Caterpillar trucks to mining sites. There also are more signs of modernity. A stop at Kyauk Myaung, a village that has specialized in clay pot-making for centuries, reveals electric lines strung from home to home, something that was lacking in villages to the north — even as many residents still bathe and wash clothes in the river due to a lack of running water.

But it is not until the vessel reaches Mandalay, a city of more than one million people, that the signs of modern civilization become widespread. The bus that shuttles Avalon passengers to the revered Mahamuni Pagoda dodges a sea of mopeds on streets lined with beer halls, mobile phones outlets and shops selling Western-style clothes. Mandalay also is the first place where passengers begin to encounter hawkers pushing watermelon-seed necklaces, elephant-printed pants and other tourist ware — a phenomenon that was absent in the less-tinged-by-tourists north.

Villagers in Shwe Pyi Thar live in simple dirt-floor, thatched-roof huts and yet often have their own mopeds and cell phones. (Photo: Gene Sloan, USA TODAY)

Mandalay is squarely on the tourist track in Myanmar, and for good reason. Attractions include the giant Budda at the Mahamuni Pagoda, which is covered in millions of pieces of gold leaf rubbed on by the faithful (men only; women only can watch), and the three-quarter-mile-long U Bein Bridge, built in 1783 from teakwood reclaimed from an old royal palace.

In what is one of the most magical moments of the voyage, Avalon’s guides place passengers into a small armada of two-person boats for a sunset sail past the bridge. As Burmese boatmen row them along its teak pilings, several of the Avalon Myanmar’s always-smiling Burmese crew suddenly appear in a boat carrying champagne glasses full of sangria and iced Myanmar Lager, offering them up along with plates of homemade roasted cashews and chips. Drinks in hand, with the bridge as the backdrop, the group quietly watches the sun descend below the horizon.

Another spectacular sunset awaits two days later in Bagan, from the top of one of the larger temples that spread across the arid landscape as far as the eye can see. As the travel writer Heidi Sarna once wrote, Bagan is like a safari park where the animals have been replaced with ancient, red-brick monuments, and the view of the sun going down over hundreds of the centuries-old structures is magical.

Dating to the 11th, 12th and 13th centuries, the ruins of Bagan are on the same incomprehensible scale as Angkor Wat in Cambodia but only draw a fraction of the tourists, though visitation is growing fast now that the country is more open.

One of the most famous historic sites in Southeast Asia, Bagan is home to more than 2,000 stone temples and pagodas that were built from the 9th to 13th centuries. (Photo: Gene Sloan, USA TODAY)

Featuring stops at nearly half a dozen temples and pagodas, the day in Bagan is the busiest of the voyage, which for the most part unfolds at a leisurely pace. Most days bring a half-day stop coupled with a morning or afternoon of sailing. The trials of navigating the Irrawaddy are such that vessels don’t often travel after sundown.

Contemporary in design with Burmese teak wood accents, the Avalon Myanmar is one of the most stylish vessels on the Irrawaddy. Like Avalon’s European river ships, it boasts spacious, modern cabins where the beds face panoramic walls of glass that slide open to create a virtual balcony — an Avalon signature. Cabin bathrooms feature large walk-in shower; marble-topped sinks; plush towels and upscale L’Occitane toiletries — a level of elegance that is rare on Southeast Asia’s rivers.

Public spaces on the Avalon Myanmar include a cozy, air-conditioned indoor lounge and bar; two outdoor seating areas with plush lounge chairs; a restaurant; two spa treatment rooms; and a small fitness room. The ship’s Burmese staff is warm and friendly, greeting passengers at every turn with an enthusiast mingalaba!, the traditional Burmese welcome, and hovering attentively at meals that feature a mix of Burmese and Western dishes.

Smaller than most of the other river ships debuting in Myanmar, the Avalon Myanmar was specifically built to manage the particularly-shallow water in northern stretches of the Irrawaddy. How long it will have the region to itself is anybody’s guess — one Avalon manager thinks at least a couple years. But for now, it’s offering travelers something relatively unique in the world of travel: A chance to go somewhere few have gone before.

Avalon Waterways’ new Golden Myanmar & The Alluring Irrawaddy tour combines 10 nights of sailing the Irrawaddy River on the 36-passenger Avalon Myanmar with two nights at a hotel in Yangon. Offered from August through April, the trip starts at $5,849 per person, based on double occupancy, plus $85 for port charges and $635 for required intra-vacation flights in Myanmar. The fare includes daily excursions with local guides; meals; and most drinks including sodas, bottled water, tea, coffee, local beer and local spirits throughout the day as well as wine with dinner.

Other Avalon itineraries in Asia include seven-night cruises on the Mekong River through Vietnam and Cambodia starting at $2,899, and 11-night tours in China starting at $3,499.