Quiz: Which River Should You Cruise? 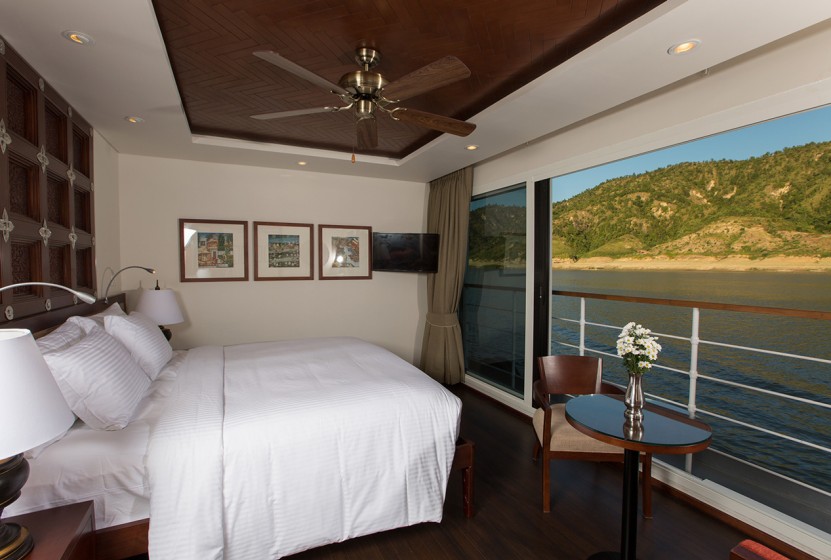 After a two- hour flight north from Yangon to the starting point of our Myanmar cruise, we land on a runway carved out of a tropical forest.

The ramshackle air terminal at Bhamo only opens on the rare times a charter plane lands and as soon as we depart, the gates are closed and locked. The only available transport into town is a queue of tuk tuks.

And when we reach the steep, sandy bank of the Irrawaddy River, there’s no dock and no sign of our ship—only a home- made rustic ferry with planks for seats.

In Myanmar, you come to expect the unexpected.

Fortunately, it’s only a short ride on this antique craft until we reach our real ship, Avalon Waterways’ new Avalon Myanmar just around the bend of the river. There, a beaming crew is on board to greet us. For the next week, we’ll be making day trips to villages where life hasn’t changed for generations.

A bend in the Irrawaddy near Bhamo (Photo by Wallace Immen)

1) The Ancient but Ever-Changing River

Authentic is a word you can use with certainty about any experience you have in Myanmar. While life in much of Asia is being increasingly westernized by the spread of global trade, the country the locals still call Burma is just emerging from half a century of politically enforced cultural hibernation.

Not only is Avalon pioneering in a country that’s just opening up to tourism, it’s exploring a part of Myanmar that’s never seen river cruising before.There are a number of new river cruise ships doing the southern Irrawaddy from Yangon to Mandalay, but Avalon Myanmar’s route start where the others leave off and goes north to the provincial town of Bhamo, the most northern city on the Irrawaddy that’s reachable boat.

A highlight on this route is sailing through stunning 300-foot high limestone cliffs known as the second defile as the river makes a sharp westward swing south of Bhamo.

Mornings or afternoons of cruising offer panoramas of fishing and village life ashore along with a sighting of the increasingly scarce Irrawaddy dolphins. 2) A Modern, Yet Traditional Ship

Avalon’s freshly launched two-decked ship carries 36 guests in its 18 suites. The modern take on a traditional river steamer was crafted in Myanmar with hardwood decks and ceilings and carved wood decor. But its suites and public areas are as contemporary as any on river ships in Europe, in shades of red and white with spacious tiled baths.

The suites feature beds that face floor to ceiling windows that open to become a Juliet balcony. The sheer privacy curtain proved useful as local launches and fishing boats regularly pulled in close for look at our ship, which is bigger and more modern than anything else on the river.

The ship is designed with an extremely low draft because the water in many places is exceptionally shallow. And because there are no docks, the ship has to pull up alongside beaches and get tied to trees to let passengers ashore for shore excursions. It’s primitive, but it’s effective.

You’re not likely to see hotels springing up any time soon in the tiny ports we visit like Kyun Daw, Kya Hnyat or Kyauk Muang. Their populations are in the hundreds and the river is their highway. Their roads are dirt trails and the only vehicles that drive to them are generally ox carts or motorcycles.

Life here is simpler than it might be in villages further south, yet, the people here are actually well-to-do by rural Burmese standards because of their specialties, like pottery making, fishing, or raising cattle or pigs.

Prosperity here isn’t measured by how many things you own, but by the quality of your work, your relationships and your ability to raise a happy family. I came away thinking we’ve lost a tremendous sense of community in the West because of our growing obsession with stuff.

At the end of our journey south, the ship also stops at the legendary city of Mandalay and then magical Bagan, where we could do excursions to view sunrise and sunset over the valley of thousands of ancient temples. The Burmese word for hello is pronounced like “mingle la bar.” It seems to be the universal greeting and the people we’re meeting who have had very little opportunity to meet foreigners use it regularly.
They seemed as genuinely curious about us as we were of them.

All the shore excursions are included in the cruise and our guide, Dorothy, is a local girl herself, born and raised in Bhamo. She knows many of the people we encounter as old friends and they invite us into their homes, schools and monasteries. So we have the opportunity not only see, but experience daily life.

One day in a tiny town, we visited a young mother cooking a meal over a wood fire as grandma cuddled the infant in a sling made from a blanket. Another morning we visited a one-room school with three teachers for five grades, where kids told us their dreams: to be a teacher, a musician, a pilot.

They’ve got enormous enthusiasm and they started singing songs. We got to sing some back to them. Who’d have guessed they know the words to I’m a little Teapot and Old MacDonald in English? We wish they can make all their dreams come true. Because we’re such a small group, arriving at a town doesn’t overwhelm even small communities. We get a private blessing at a nunnery where we offer alms. Another day at a monastery, we deliver a morning meal prepared by the ship’s chefs to senior monks and their avid young initiates.

Every day brings visits to temples rich with gilded Buddhas and opportunities to get breathtaking views at sunrises and sunsets over misty landscapes studded with stupas and temples. The chef’s suggestions at lunch and dinner are of course Burmese. And you’ll be at home with the cuisine if you like Indian, Chinese and Thai food. Burmese style is a blend of the influences, with a bit less spice, although bottles of hot sauce and bowls of ground chilies are available if you want to fire things up a bit. The kitchen staff has trained for serving western tastes as well and they also gamely prepare alternatives, like pasta for lunch or pancakes and omelettes at breakfast.

One advantage we have being out of the modern world so long is that Myanmar’s agriculture is still natural. None of the foods here are processed or modified and everything is made daily from scratch.

I found the locally sourced chicken a revelation. It’s free range and has a depth of flavor that has been bred out of the force-fed chicken we’ve grown used to in North America. The intensity of flavor is equally notable with the peanuts that we see being shelled by hand in the villages. The nuts grow wild and are tinier than any you’ll find at home, but so tasty even a few are a treat.

Breads and pastries are remarkably light and fluffy because they’re made from a local soft wheat flour. A special treat each morning are cheese buns that guests avidly await as they come fresh out of the oven at breakfast. Louie, our bar waiter is there when you need him (Photo by Wallace Immen)

A delicacy at cocktail time are plates of cashew nuts that are freshly roasted on board. The ship’s bartenders become passenger favorites, mixing up complimentary drinks of the day concocted from spirits made in Myanmar—yes, there are liquors made locally that try gamely to mimic gin, rum and even Scotch.

The local Mandalay Beer is excellent and the local spirits are palatable if served in mixed drinks. There are also Myanmar wines, although the complimentary wines with meals on the ship thankfully come from France.

With many opportunities to mingle at the bar, I learned the essential phrase in Burmese you use to order a brew.