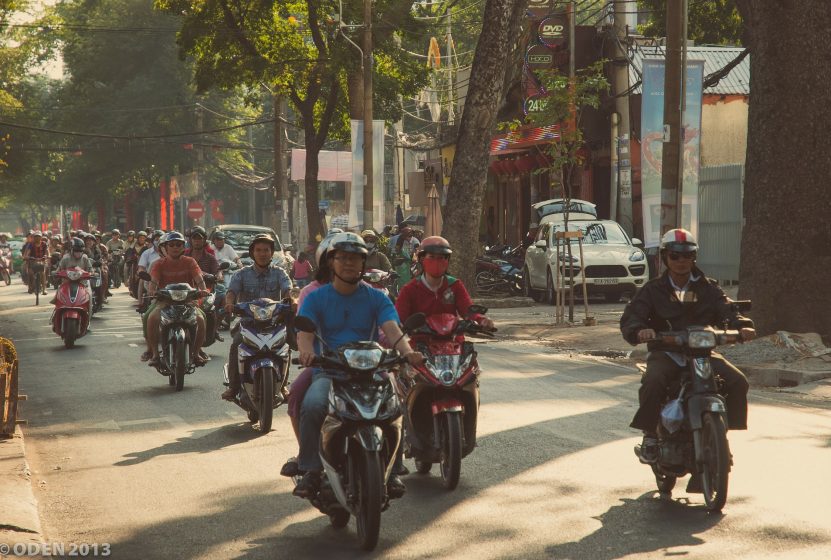 Ho Chi Minh City, better known as Saigon, is home to 13 million people … and about 8 million motorbikes. Nowhere is this density more apparent than on the city’s streets. Stampedes of scooters race along, swerving among cars and laden trucks, creating the infamous Saigon traffic. To be a pedestrian in Saigon is to discover both the strength and weakness of this city: Sights in the downtown—the beautiful Central Post Office, the lively Saigon Opera House, and the bustling Ben Thanh Market among them—are within easy walking distance of each other. But to walk from one to another, you’re going to have to cross some daunting streets.

On a recent visit, I was told by more than one local that the crosswalks are “mostly just for decoration.” It’s not uncommon to see increasingly bewildered tourists stranded at crosswalks, waiting for their turn. And while it’s true that there are stop lights at major intersections, there’s rarely a dedicated safe time for pedestrian crossings.

That’s not to say you can’t cross the street in Saigon. But to do so, you’ll need to dramatically adjust your world view, at least for the length of time it takes to wade out into the raging river of traffic.

I got—and successfully implemented—the following advice from locals about the best way to cross the street in Saigon. It’s not a technique that prizes safety above all, but it’s the way that locals cross, and it’s how cars, motorbikes, and scooters are expecting pedestrians to cross—and in that way, offers a buffer of safety by way of cultural familiarity.

First, take a deep breath. You’re going to need it, because you may find yourself holding your breath as oncoming traffic bears down on you. Next, angle your body and your gaze toward the oncoming traffic. Raise one arm in the air (this gives you a little extra visibility), and, as soon as there’s enough space to begin without getting immediately hit by a vehicle, step off the sidewalk and into the street. Walk slowly and steadily, watching the traffic and keeping your arm up. Fight the urge to speed up, dodge scooters, and generally Frogger your way across the street. As long as you are walking steadily and confidently, you are a predictable moving object in the eyes of motorists. Start darting and you break the system.

Watch the video above for a first-hand view of what it’s like to cross the street in Saigon. Special thanks to Nguyễn Hoang Nam, one of Avalon Waterways’ Vietnam guides, for being such a confident and knowledgeable demonstrator.

What better way to experience a new place than by

Montmatre has a long history of being a home for m

The vibrant colors of fresh produce are what immed

Did you know that Halong Bay is home to approximat

Cruising to Rüdesheim and watching the countrysid

Home to a plethora of wildlife like sea lions, pel

A picture perfect sunset on the Mekong River!

Fancy yourself a bit of a foodie? What better way

The Sky Deck on our Europe fleet is the perfect sp

Immerse yourself in the hustle and bustle of Bangk

Are you a fan of local markets? Visit one in Peru

Join us for an adventure to ancient Egypt, as well

Nothing beats a sunrise from your Panorama Suite.

Hike, paint or explore Arles on our Active & Disco

The Amazon is the world's biggest rainforest, teem

During World War II approximately 72% of the city

Did you know...Prague is a city full of spires? It

A morning coffee and fresh pastry is all you need