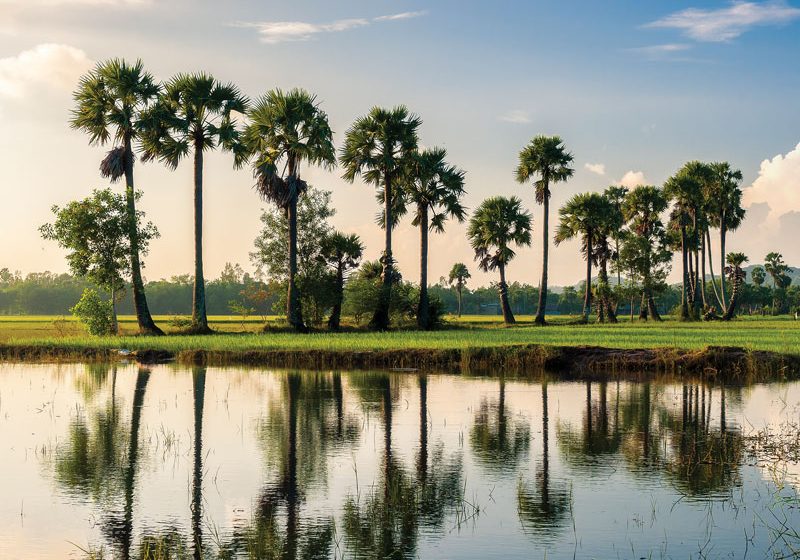 By Kimberly Lovato | Posted to Virtuoso.com

On a cruise down the Mekong River in Vietnam and Cambodia, passengers become more than just spectators.

In the back of a motor cart, five of us hold conical palm-leaf hats tightly to our heads to prevent the wind from tossing them like Vietnamese Frisbees. “Hello! Hello!” call roadside grill masters roasting corn on the cob and skewered meats. Our stomachs growl. The dense verdure flanking the road drips with fresh rain, and mass is in full swing at the Cu Lao Gieng church, built on this island of the same name nearly 150 years ago. Despite our recognizable headgear, called non la, we are obviously visitors, and that earns us friendly grins.

It’s 4 p.m., and we’ve already visited the home of a woman in her 70s who handmakes non la on her porch, sipped snake wine (like a potent whiskey) on an island in the Mekong Delta, and watched a man shape 15-foot wood planks over an open flame to make sampans, the ubiquitous low-profile skiffs that shuttle people – including us, on our twice-daily excursions from the new 36-passenger Avalon Saigon – along the Mekong River.

Launched last September, the Saigon takes cruisers on 13-day land-and-water adventures between Ho Chi Minh City and Siem Reap, along Southeast Asia’s longest waterway, the lifeblood of the roughly 60 million people who live and work along its banks and tributaries. With just 18 suites – all are 245 square feet, with floor-to-ceiling, slide-open windows – the ship remains intimate on its roughly 420-mile route. And, thanks to its shallow draft, the Saigon is one of the few vessels able to sail into Cambodia’s Tonlé Sap (water levels permitting), a freshwater lake known for its Chong Khneas floating village, and our disembarkation point for the ten-mile drive to Siem Reap.

The ship feels like a swanky floating boutique hotel, with a gym, a spa, locally sourced art and woodwork, top-notch cuisine, and friendly, omnipresent staff offering fresh-squeezed juice and cold towels to combat the humidity. It’s tempting to stay on board all day, but the organized morning and afternoon outings are what elevate us from bystanders to players in the scenes around us. All excursions are included in the fare, and dedicated guides (one in Vietnam and one in Cambodia) accompany us for the duration of the trip.

“Guide” may not be a satisfying descriptor: Our leaders are storytellers, teachers, translators, and conduits for a deeper interpretation of our experiences. We climb the 300 steps to the eighth-century Wat Hanchey, a temple compound outside Kampong Cham, Cambodia, then sit cross-legged on straw mats inside an ornate pagoda painted the color of summer sunshine. Incense swirls in a warm breeze that whistles through the open doors, and two saffron-robed monks freely answer questions about their sequestered life. At a school in the village of Angkor Ban, 50 eager children listen to our accents and practice their English.

It’s hard to forget that, just a little more than 40 years ago, this exchange could never have happened. Under the Khmer Rouge, the brutal regime that took the lives of more than 2 million Cambodian citizens in the late 1970s, teachers and clergy were regarded as hostile opposition and regularly executed. Our Cambodian guide, Virak, openly recounts childhood memories of stray bullets overhead. And Phiem, the ship’s cruise director, shares his personal history as a Vietnamese boat person after the fall of Saigon in 1975. Despite these countries’ harsh recent backstories, the goodwill of their citizens is overwhelming. From a teeth-loosening oxcart ride through the Cambodian countryside to meet local farmers to tours of the War Remnants Museum and Cu Chi Tunnels in Vietnam, our diverse interactions share a common goal: human connection.

“Ask questions, taste our food, teach us, and learn from us too,” Phiem says.

The experiences don’t stop at the gangplank, either. The Saigon crew are a blend of Vietnamese and Cambodians, and the ship’s air-conditioned Panorama Lounge is an all-purpose rec room: By day, passengers relax, check email, and order strong Vietnamese coffee, but an hour before dinner, bartender Resmey shakes up specialty cocktails. While we’re docked in Cambodia’s capital, Phnom Penh, teenagers from a local orphanage come aboard to demonstrate traditional dances. The lounge turns into a stage one night for an impromptu karaoke session with fellow travelers, then becomes a classroom when Phiem educates us about our serpentine path: The Mekong tumbles more than 2,600 miles from its origin in Tibet, flowing through China; along the borders of Laos, Myanmar, and Thailand; and into Cambodia before splaying out in Vietnam’s Mekong Delta, a vast and swampy labyrinth of islands, floating villages, and rice paddies. In Vietnamese, the Mekong is called the River of Nine Dragons, a reference to the nine mouths that expel the Mekong into the South China Sea. But Mother of Rivers, as it’s sometimes referred to in Thailand and Laos, seems most fitting, as it provides for so many.

Before our final morning tai chi session on the bow’s open-air deck, all is quiet save for the arrhythmic splat of a fishing net landing on the water. The sun rises to fill in the inky outlines of riparian vegetation and stilted huts, and the canvas of river and sky turns midnight blue, then blush, then guava pink within minutes. Is the fisherman also in awe of Mother Nature’s morning show, or is it simply early-bird opportunity that lures him out at this hour? Whether serendipitous or scheduled, these interactions evoke the privilege of travel, a prohibitive indulgence, I imagine, for most people we meet, whose days are spent hauling produce or handicrafts to market, or contending with the Mekong’s mercurial ebbs and floods, which determine the season’s harvests. These encounters are as much chances to bolster a new perspective as lessons in gratitude for the opportunity to do so.

The trill of outboard motors breaks my reverie. Seemingly out of nowhere, sampans ripple the river, laden with everything from pyramids of jackfruit to children who wave and yell “Hello!” I return the familiar salutations. It’s the most valuable souvenir I’ll take home, these daily reminders that happiness comes not from acquiring more, but from the wonders accumulated when we journey with our hearts and eyes wide open.