6 Highlights from an Active River Cruise with Avalon...

6 Incredible (And Active) Experiences Sailing the Danube with...

Confessions of a River Cruise Virgin 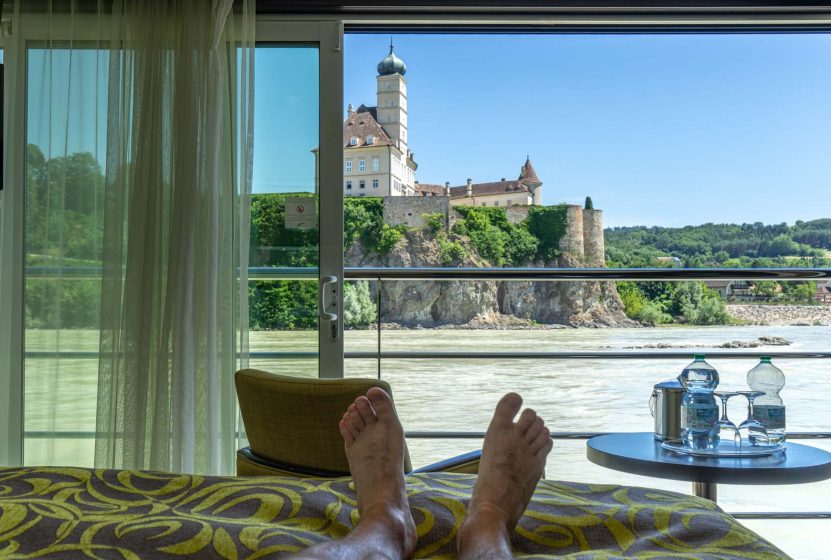 By Michael Turtle | Posted to TimeTravelTurtle.com

As I lie on my bed and look out the window, I see the trees along the side of the Danube pass by.

The forest rises up the hill to a small monastery built on a rocky outcrop. It looks as though it’s from a similar era to the town I had seen a few minutes earlier.

It’s not often in my travels that I can see the landscape change without even getting out of bed – but it’s not often that I am on a ship like this.

My home for the week is the Avalon Impression, one of the dozen ships that Avalon Waterways uses for cruises in Europe. And one of its unique selling points is that the bed faces the enormous window (unlike most ships on European rivers, which have the beds facing the wall).

There’s a lot that I want to tell you about the specifics of the Avalon Waterways ships and itineraries – but I’m going to save those details for my next story.

First, I want to focus on the experience… because all of my preconceptions have been shattered on this trip.

You see, this is the first time that I have done a river cruise in Europe and what I had expected turned out to be completely different to the reality.

I have done short cruises before on rivers like the Nile in Egypt or the Irrawaddy in Myanmar. But they are the types of cruises that so everyone who visits those countries does, as standard a tourist experience as seeing the Pyramids or visiting Bagan.

When it came to Europe, I had usually considered a river cruise to be an alternate style of travel, rather than something that could fit in with my preferred way of seeing a country.

To be rather blunt (and rude, I’m sorry), I had always assumed European river cruises were for old or lazy people.

I should have realised on the first day that I was wrong, when some of the passengers set off on bikes to explore Budapest, while others squeezed into small plastic Trabant cars to visit some of the city’s retro spots, and I went underground into the vast cave system that thermal waters have created beneath the Hungarian capital.

But it wasn’t until the second day on the cruise – after we had left Budapest and sailed overnight to Visegrad – that I really began to first appreciate how much I hadn’t understood about a European river cruise.

Because this morning, as our ship stayed moored at this small Hungarian town on the Danube, some of the passengers went kayaking in the river, some went hiking up a mountain, and some starting drinking wine in a medieval castle at 9am. (Can you guess which one I chose to do? Hic.)

It’s worth pointing out that not every river cruise is like this. I’m on one of Avalon’s ‘Active & Discovery’ itineraries, which does have more included excursions like cycling or hiking than your average trip. That’s why I was invited by Avalon to experience it, because they thought it would be particularly interesting to readers like you.

I’ll go into a lot more specifics about the Active & Discovery itineraries in my next story because it’s a really interesting way to run a cruise. But, irrespective of the special activities on this Avalon trip, I’m getting a sense of how a river cruise can enhance a journey through this part of Europe.

Unlike an ocean cruise, where you might spend a day or more at sea sometimes, you are always in your destination on a river cruise. Sometimes you might stop in two or three different places during the day, exploring new towns and doing different activities.

A good example of this comes later in the cruise, when we are in Austria. One morning I wake up in the small town of Grein and there’s a guided tour of the sights.

There’s not a lot to see – it’s quite a small place – but with a local showing us around, you can appreciate the details. Inside the town hall is a small town theatre, considered to be the oldest in the country, with its original decorations and wooden seats that used be locked up by those who had bought a season pass (things are more egalitarian these days).

We have lunch on the deck of the Avalon Impression where a barbecue is being served as an alternative to the meal that’s on offer in the dining room. As I eat outside on this sunny summer day, I watch the scenery go past while we sail towards our next stop at Mauthausen.

Come afternoon, I head out on an excursion from Mauthausen to visit the nearby St Florian Monastery, one of the most impressive examples of Baroque architecture in Austria, with an incredible library showing off some of the 150,000 books held in the collection. We finish this visit with an organ recital in the stunning basilica.

(While I joined the group that went to the monastery, there was also a group that went cycling to a strawberry farm, and another excursion to the site of the Mauthausen Concentration Camp from the Second World War.)

Then we set sail again, heading towards the Austrian city of Linz, which we arrive at after dinner. We are met my two local guides who take a group of us for a pub crawl and show us a few of the city’s sights as the sun sets.

It’s probably the busiest day of the whole trip – certainly there are more relaxing ones where more time is spent sailing on the river – but it’s a perfect example of the main thing that I came to realise on this cruise: That the ship is here to complement the journey, not to define it.

If I was to analyse my concerns about river cruising before I actually experienced it, I was worried that I would find it too restrictive, that I wouldn’t be able to move at the pace I wanted or do the things that interested me.

In fact, it is the opposite – it allows me to do more of what I want!

It feels so good on the first day to put my shirts on hangars in the wardrobe. For the next week, there is no packing and unpacking, no lugging a bag around. Every morning breakfast is waiting for me, I know how I can get a quick coffee at any time (there are two free coffee machines), and I know where lunch and dinner will be.

This means that every day the basics are taken care of – accommodation, transport, food, coffee, wine. It then gives me more time and mental space to explore.

Even when it comes to exploring, there is far more flexibility than I expected. We spend two days in Vienna and, on the first day, I join an included excursion where a local guide shows some of us around some ‘insider’ parts of the city – essentially a look at daily life, which is interesting for those who haven’t seen this side of Europe before.

The next morning, though, I just borrow one of the ship’s bikes and head off to see things on my own. There are 16 bikes on the Avalon Impression and they are free to use whenever you want.

I use the bike for the whole day, riding through the World Heritage-listed historic centre and all the way out to visit Schonbrunn Palace.

(Incidentally, I could have joined an organised tour of Schonbrunn Palace that took people from the ship the afternoon before, but wanted to do this one on my own. That’s the kind of flexibility that’s available.)

And then there are the times when I just want to relax a bit – and that’s easy too. I can sit in my room and look out the window, I can lie on the deck and get some fresh air, I can grab a coffee and a cake in the club room, or I can sit in the lounge and chat to people.

And there’s always someone to chat to.

Perhaps it’s no surprise that you get to know your fellow passengers when you spend a week on a ship together. There are only 83 guest rooms on the ship (each can accommodate two people) so it’s not a huge group you’re sharing the journey with. Faces become familiar quite quickly and you find common interests as you float along.

What I find interesting is how there is such a broad age range on board. As I mentioned earlier, I thought river cruises were just for old people but that’s clearly not the case here. It may be partly because this is an ‘Active & Discovery’ itinerary that appeals to younger people… or it could simply be that I was wrong.

Either way, these Avalon itineraries certainly appeal to all ages so it’s no surprise to find families where three generations have come for a holiday – each can choose different excursions and activities to do, while still spending most of the time together.

Without wanting to sound too tacky, the whole ship starts to feel a bit like a family by the end. After all, we have shared the same home for a week, eaten our meals together, experienced the same highs.

And there have been plenty of opportunities for highs. Although you can have as relaxing a cruise as you like, there are activities every day that could easily fill most of your trip.

I’ve mentioned quite a few of them already. But I also spent an evening in a castle with the count who still lives there, cycled through the colourful landscapes of the Wachau Valley, learned (and tasted) the secrets of absinth in Vienna, and walked through the vineyards to a special local dinner.

(I’ll write more about some of these experiences soon.)

On the final full day, most of the passengers choose to visit the Engelszell Abbey, the last Trappist monastery in Austria, which is just a few minutes walk from where our boat moored in the morning. There are just four elderly monks left here but they still make their own beer and schnapps.

We get a tour around the monastery and the gardens before we start a beer tasting, everyone sitting together, laughing and chatting between the commentary.

Perhaps it was a bit too early in the day for beer tasting, but it puts everyone in a good mood. So there’s a relatively large group of us that set off after lunch that day for a hike up to a viewpoint on the Danube where you get an incredible view of an oxbow in the river.

As we stand there, sweating from the walk up the hill, the Avalon Impression comes into view, sailing along the Danube.

It’s coming to meet us at the finishing point of our hike. But it also creates a slightly surreal moment, as though I am having an out-of-body experience, watching my trip from above.

I’ll never look at river cruising the same again. But I will be back for another one!